You are here: Home / Wellness / Nutrition / Should You Be Gluten-Free?

Over the past few years, the gluten-free diet has become a huge phenomenon and gotten tons of attention as a means to lose weight or eat healthier. Sales of gluten-free products have sky-rocketed and more and more food companies are making and promoting their gluten-free products (even those that were already GF to begin with). Celebrities, young women, and average Joes everywhere have jumped on the GF bandwagon.

Let’s back track a little bit first. What exactly IS gluten anyway? Gluten is the general name for proteins (gliadin and glutenin if you want to get technical) found in foods such as wheat, barley, and rye, as well as many other foods you might not expect, like salad dressings and soups. Gluten is not a toxic ingredient like its reputation may lead you to believe. It simply gives elasticity to dough and helps hold foods together (gluten in Latin means “glue”). It basically determines the “chewiness” of baked wheat products.

Many people these days have started following a gluten-free diet because it has been talked about so much in the media and has this “health halo” over it. They either think it’s a good way to lose weight or just a trendy diet to be on. Then there are people who have a legitimate medical reason not to consume gluten. This 1% of the population describes those with celiac disease. The only treatment for celiac disease is to follow a strict, gluten-free diet for life. Consuming gluten when you have CD causes damage to the intestinal villi (the finger-like projections in your intestines that help your body absorb nutrients). If people with celiac disease do consume gluten, their bodies are unable to absorb nutrients and they can become severely malnourished.

But celiac disease may not be the only issue anymore. New research is making scientists think that there really is such a thing as “non-celiac gluten sensitivity” or NCGS. This describes people who have celiac-like symptoms whenever they consume gluten (diarrhea, abdominal discomfort, cramping, pain, gas), and feel better when gluten is removed from their diets. The difference is that gluten does not cause damage to their intestines, but rather may cause an immune reaction. Unfortunately, there is not a way to diagnose NCGS like there is celiac disease (which is diagnosed by blood tests and a biopsy of the intestine). Really the only way to determine if you have NCGS is to rule out all other options, and if you experience relief only when gluten is eliminated. A small study in Australia found that NCGS exists in certain clinical conditions, including 5-20% due to irritable bowel syndrome (IBS).

Other research that has been done to dig deeper into this issue suggests that gluten may not be the culprit after all, but that FODMAPs are responsible for GI symptoms, such as discomfort, gas, and bloating. FODMAPs are: fermentable oligosaccharides, disaccharides, monosaccharides, and polyols. (What the heck are those?) Foods that are high in FODMAPs include most dairy products, certain fruits/vegetables (apples, pears, cherries, raspberries, watermelons, stone fruit, mango, papaya, artichokes, asparagus, garlic, mushrooms), certain grains (wheat, rye, barley, and spelt), most legumes, honey and agave nectar, and some food additives (inulin, xylitol, etc.). That sounds like a lot of foods to eliminate, but there is an equally long list of foods that are low in FODMAPs. You can find these lists in many places online if you’re curious.

Following a low FODMAP diet can be a little more complicated than a gluten-free diet, as it includes a wide array of foods. It is also recommended to eliminate one food/category at a time – that way you can more easily identify which one is causing problems. Then you can gradually begin to introduce foods back into your diet as tolerated. You may have noticed that there is a little bit of overlap in the low FODMAP and gluten-free diet, since fructans are present in gluten-containing grains (wheat, barley, rye), which is why some people may experience relief on a gluten-free diet. But the relief may not last.

Another thing to consider: is it just placebo effect? If you believe something will make you feel better, it is likely that it will. For example, when you pop 4 ibuprofen pills for your aching back. Is the pain really gone? Or is it “gone” because you expect it to be? Same thing goes for following a gluten-free diet. Do you actually feel better because you cut out gluten, or do you just believe that is what solved your problems? OR were the gluten-containing foods you were eating before just straight-up junk? That could be the reason your symptoms have subsided; you’ve simply cleaned up your diet and eliminated unhealthy foods! Foods like chips, cookies, cakes, and beer all have gluten in them. And they weren’t exactly nourishing your body by any means. Removing them most likely will make you feel better. You don’t need a scientist OR me to tell you that.

Now, I’m not saying that gluten sensitivity isn’t a thing, because apparently, it is. But you may not necessarily have NCGS. I’m just asking you to look a little closer at your diet and ask yourself if gluten is the problem, or if it’s the combination of all the foods you eat on a regular basis.

If you truly do believe you have a sensitivity to gluten, I have some good news for you. A ton of healthy foods are naturally gluten-free, such as fruits and vegetables, meats and poultry, fish/seafood, dairy, beans, nuts, legumes and certain grains like rice and quinoa.

As far as packaged foods go, most labels today indicate whether an item is gluten-free or not. You just have to check the label to be sure. But beware of tricky labeling; “wheat-free” does not always mean “gluten-free”, and some other ingredients like malt flavoring or extract may contain gluten. To be safe, stick with foods in the gluten-free section or those that are clearly labeled gluten-free, or ask an employee for help. (This is especially for individuals with celiac disease who should not ever consume gluten).

The truth is, it can be super pricy and difficult to follow a gluten-free diet, and it isn’t even guaranteed to be healthy (or healthier than whatever you’re doing now). Many gluten-free foods do have nutritional value – absolutely! Like the foods I mentioned above, and gluten-free cereals and pastas, to name a few. But many of the processed gluten-free products that are sold today have other added ingredients to compensate for the lack of gluten, like extra fat or sugar. Unfortunately y’all, gluten-free cookies are still cookies. Don’t let the GF label blind you. If you eat naturally gluten-free foods however, like fruits, vegetables, meat and poultry, you might miraculously notice a positive change in your body. With all that being said, I don’t recommend following a strict gluten-free diet if you don’t have a reason to.

If you are having GI distress, it can be very hard to pinpoint what exactly is causing it. Trust me, I would know. Unfortunately, I have had tummy issues for years now. I’m a dietitian. I eat very healthy the majority of the time. I even track what I eat for goodness sake’s, and I still don’t know what causes my stomach to be upset most of the time. (Except for the times when I eat a little too much sugar or have too many Michelob Ultras… then I know the culprit). This May, I had a colonoscopy and an EGD (esophagogastroduodenoscopy – examining your esophagus, stomach, and the first part of your small intestine) and I feared the worst. Celiac disease, Crohn’s, ulcerative colitis? The results came back: none of the above. Thank the Lord. They did however find several polyps in my stomach. The polyps were not cancerous, but the biopsies came back “abnormal”, so I had a repeat EGD a few months later to follow-up on the situation. They actually found a few more polyps in my stomach, but these came back normal so they weren’t concerned. Again, thank goodness. They just switched my acid reflux medication to something that is less likely to encourage gastric polyp growth. Fine by me.

This post may have been a little long-winded, but at the end of the day, my point is: take control of your health. Be aware of what you are putting in your body and how it might be affecting you. Fuel your body with nutritious foods – don’t choose what to eat based on fad diets or Dr. Oz recommendations. Know your body and treat it well. Nutrition determines so much about your overall health and well-being now and in the long-run.

If you are experiencing any weird symptoms, whether they are stomach-related or otherwise, don’t ignore them. Do something about it. It’s always better to be safe than sorry. At first I felt a little silly that I went to the trouble of getting a colonoscopy and EGD just to find out that I have irritable bowel syndrome, but if I hadn’t, I never would’ve known that I had polyps in my stomach. Even though they weren’t pre-cancerous, who knows if leaving them there would have caused problems down the road.

If you do believe your symptoms are diet-related, trial and error is the best way to determine what may be causing you discomfort. Write down what you eat and track when you have symptoms so you can try to find a correlation between the two. Eliminate one thing at a time for a week or so to see if the issues resolve. If you aren’t getting any relief, go see a doctor and try to get help. Trust me – it could be worth it!

NEW FAVORITE RECIPE ALERT!!!!! I feel like I say that all the time but… this time I think I really mean it. So obviously, it’s fall. Pumpkin everything. Duh. I recently tried another new pumpkin recipe and fell in L-O-V-E. And so did everyone who has tried these cookies. So, you’re welcome. I hope you enjoy them just as much!

1. Preheat oven to 350 F. Line a baking sheet with parchment paper and set aside.

2. In a mixing bowl, whisk together pumpkin, egg and vanilla until well combined.

3. In a separate bowl, combine all remaining ingredients.

4. Fold together the wet and dry ingredients until just combined – don’t overmix. Don’t be alarmed by the very thick cookie dough; it’s supposed to be this way.

5. Drop by spoonfuls onto cookie sheets and slightly flatten. I usually prefer to spray the palms of my hands with non-stick cooking spray and use my hands to form balls with the dough.

6. Bake for 12-14 minutes until lightly browned. Note: I took my cookies out at 9 MINUTES and they were ready – so watch carefully! I recommend setting your timer for 9 minutes and adding more time as needed.

Allow to cool for a few minutes then DIG IN. 🙂

*Cookies stay fresh at room temperature in an airtight container for up to 3-4 days.

Motivation is what gets you started; habit is what keeps you going.

“We are a participant in the Amazon Services LLC Associates Program, an affiliate advertising program designed to provide a means for us to earn fees by linking to Amazon.com and affiliated sites.” 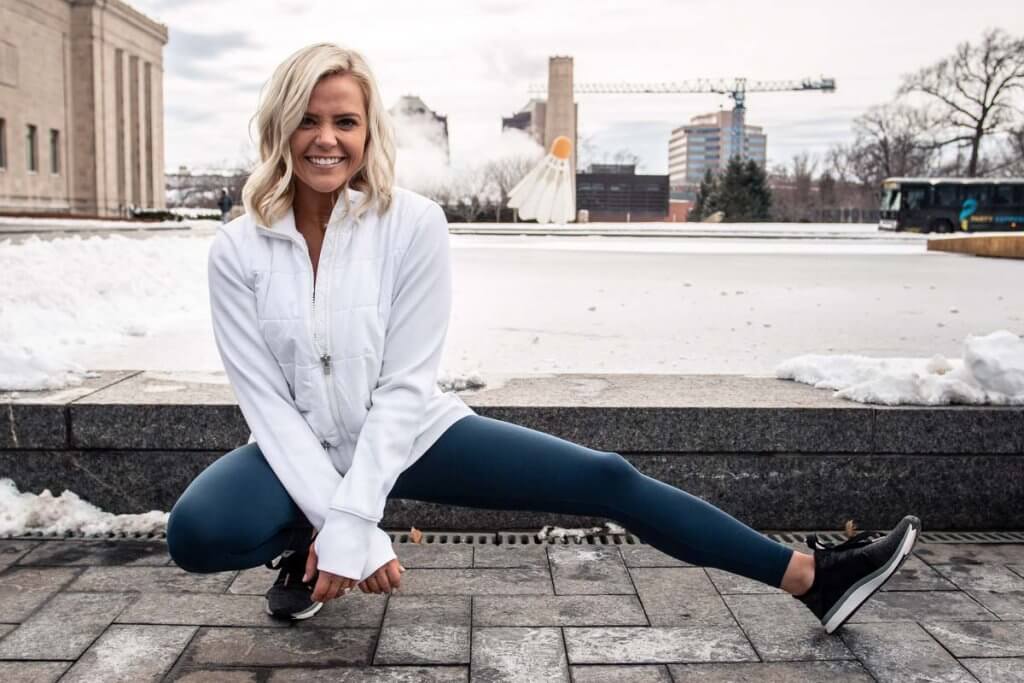 Hi, friends! I'm Shanna, a Registered Dietitian, wife, dog mom and Midwest gal with a passion for nutrition and wellness. My goal is to make living a healthy lifestyle easy, affordable and fun. Follow along as I share nutritious recipes, intuitive eating tips and more.